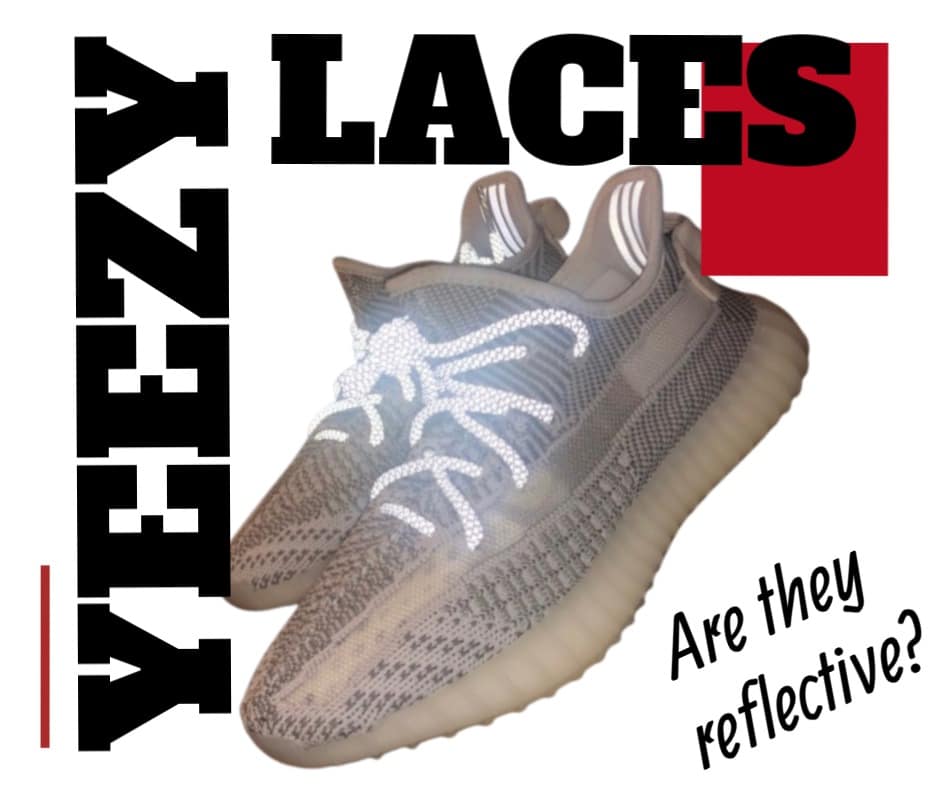 Imagine being a Kanye West stan or general sneakerhead. It’s all you’ve ever known to be.

Stunning Yeezys makes you feel more confident, which helps in class and life.

But then it happens; you notice your matte black Adidas Yeezy Boost 350’s reflective laces aren’t reflecting anything. But if you look closely, there is the slightest glimpse of something in the dark.

You’ve probably noticed that the laces on your Yeezys glow and flash when you move around. Are these reflective laces? Is there any special technology behind how these lights work?

In this blog post, we’ll go over some of the most common questions. And provide our proven opinions on whether or not they’re reflective.

The history and backstory of Yeezy shoes revolve around one individual, Kanye Omari West nicknamed Ye. This was the man behind the transformation of ordinary running shoes into high-end designer streetwear. In 2009 Kanye began a sneaker collaboration with Nike which barely lasted for almost 4 years.

Although, during these years, Kanye managed to come out with some of the most epic sneaker designs of all time. The shoe named Nike Air Yeezy 1 was introduced in three colors (Blink, Net Tan, and Zen Grey). Its prototype was sold for 1.8 Million Dollars.

Later on, for almost two years, the line of all Yeezy shoes with Nike was on the verge of being discontinued. But, all of a sudden, Kanye came up with a fresh design for his ardent followers. He initiated the Nike Air Yeezy 2 collection in 2012, which features Pure Platinum and Solar Red. Then, at the beginning of 2014, Yeezy managed to release another model known as Red Octobers. That was later given the name “Most Expensive Yeezys”. Because these were advertised as some of the rarest and expensive Yeezys to find on the resale market.

However, that marked the end of Yeezy’s partnership with Nike, which meant no more Yeezy releases under the Nike brand. However, this end ushers in a new era of Yeezys by partnering with Adidas. Kanye ditched Nike in favor of a ten-million-dollar deal with Adidas. An agreement that promises complete creative power as well as a 15% royalty.

As a result, the Adidas Yeezy journey began in 2015 and is still going on in 2022. Under this partnership, several Yeezy models have been launched and some are on the way. This partnership has been so fruitful for both firms that every time a new pair of Yeezy is set to be released, millions of people line up outside retailers to get their hands on a pair.

What Does Yeezy Mean?

Kanye West used the name “Yeezus” to portray himself as a high-level “God” of rap, after getting inspired by his mentor Jay-Z, who gave himself the name J-Hov (or Hov), taken from Jehovah, the Hebrew term for God.

Yeezus is the name of Kanye West’s groundbreaking sixth studio album, which was released in 2013. It is derived from the name of Jesus, who most Christians believe is the incarnation of God the Son and the long-awaited Messiah.

Ye is one of Kanye West’s nicknames, and it’s also the name of his eighth studio album, which came out in 2018.

According to Forbes, Yeezy is a contraction of the nickname “Kanyeezy” given to him by Jay-Z at the beginning of the song “Lucifer” on The Black Album (2003).

Yeezys are available with both normal and reflective laces. It is entirely up to the consumer to decide how much he is willing to pay. There are several Yeezy that come with reflective laces as standard. However, they do carry a premium price tag. The Yeezy Belugas, Yeezy Turtle Doves, and, perhaps most notably, the Yeezy Boost 350 Static Reflective are among them.

Yeezy laces are made from a material called “nylon.” This is a synthetic material that is made from natural gas and oil. Nylon is a polyamide polymer that can be spun into fibers and fabrics for use in clothing and other items. It’s also the same material used to make fishing lines and industrial rope.

Nylon can be made in different colors and textures, so it’s possible that your pair of Yeezy laces is reflective. The reflective properties come from the dyeing process that yarn goes through before being made into fabric or lace.

Yes, Yeezys laces do glow in the dark. Additionally, there are glowing laces available on the market that can upgrade your old Yeezys. And make them look brand new. Laces that are highly similar to the neon yellow color, glow the most. To make the laces glow in the dark, simply charge them under UV/Sunlight.

How Can You Tell If Yeezy V2 Glows Are Fake?

How Can You Tell Yeezys Are Fake?

Look for a big Adidas or YZY logo on the shoe to detect whether it’s fake, as this is a major giveaway for fake Yeezys. Examine the inside label for “Made in China,” the bar code, shoe size, gender characteristics, and the serial code. If it has any additional information, the Yeezys are most likely to be fake.

How Thick Are Yeezy Laces?

The thickness of Yeezy’s laces ranges from 3 to 5 meters. It all relies on the client’s requirements. And the number of thick laces he or she wishes to purchase for his or her sneakers.

PrevPreviousHow to Clean White Shoelaces like a Pro
NextLace Length For Shoes: What’s The Right Size For Your Shoes?Next